Q & A Round 3--The Difference Between Living and Being

I appreciate this question a lot because it is very applicable to my current state of affairs.
From the inspirational Kaya:
"My March Q: In your recent post you said "We never really stopped being it, but somewhere along the way, we did stop living it." which is a similar thought I've had, the difference between being it and living it. So my question for you for March is exactly that. What do you feel is the difference? What do you need to make it a life you're living, rather than just a state of being?".

What do I feel is the difference between living M/s and being it...This sounds like such a simple question on the surface, especially given that it references something I wrote fairly recently...It's not so simple when I start to think about it. I mean, really think about it.

There are lots of differences. Some are so subtle as to barely be noticeable. Others are more glaring, obvious, unavoidable.
The subtleties are in how I feel, the minute differences in our responses to each other.
Being, I say something, he looks at me, and I cringe. Living, I don't say it. Or, I am acutely aware that there will be consequences for the words which come out of my mouth. Being, we both know I did something wrong--living it there are consequences. Always.
Being, there is a yearning, an itch, a wistful feeling at a D/s scene or interaction...Living, there is a visceral reaction, a twinge, a flinch of expectation knowing that something intense is coming...
Being sex is just sex. I man, I'll never be in charge, but it's still just sex. Living sex is...exciting and humiliating, and so much more. It's flying without wings and jumping off the edge held only by a tenuous chain.

Being I know I'll lose the argument. Living there is no argument.

What do I need to make it a life I'm living, rather than just a state of being...This one is more difficult, because it asks for solutions, and I'm a problems kind of girl.

I think it has a lot to do with where we place importance in life. For me, the importance has never been work. And now it is. I don't like it, but that's where we're at for the foreseeable future.
To live it, not just be it, I need there to be importance placed on M/s. By both of us. I need him to tell me what to do. And he needs me to not fight him when he does.
I need expressions of M/s. Not just the cleaning and back rubs, but the pain, the drowning.
I need those moments of genuine fear. That instant in time when all logic and understanding is suspended, when all I know is that it doesn't matter how hard I struggle, or how much I fight--there is nothing I can do to stop the inevitable...
As much as I have grown to dislike it, I need to know without a shadow of a doubt, that he will do as he pleases regardless of my objections. 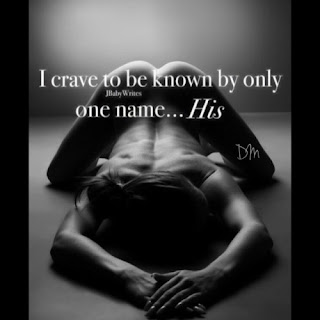 Posted by Storm at 9:25 AM 7 comments: Links to this post