So I never did read the books, but I finally got to watch the movie. Normally, I'm a book girl all the way, but I have realized that my life's reading is going to consist of state codes and SOP's (for me, that admission was tantamount to accepting that the sun won't rise tomorrow).

I don't know what I was expecting, but I was disappointed. Maybe I was looking for it to rekindle something in me, and it certainly did lead to some realizations, just not in the manner I had thought that it would.

Since I like to file my complaints before anything else...

Could they have picked any two characters with less chemistry? I mean seriously, the spark between them was tantamount to my attraction to the pile of dirty dishes in the sink--c'mon baby lets get it on, you know you want to do me!
With a playroom that cool, how come they're hardly ever in it?
On what planet does a dom spend that much time going down on a sub and she never ever ever reciprocates??
Who was really supposed to be in charge? From where I'm standing, it sure looked a hell of a lot like her.
Where exactly was the D/s? Hottest moment in the whole thing was when he made her eat. Seriously.
Her character made me want to beat her myself, and normally that's just not my bent--she was a raging brat.
According to Alpha, "Mr. Grey is a pussy with consistency issues and a serious lack of self control"...His commentary would have been quite annoying if I hadn't agreed with him.
What exactly is with the implication that Grey is the way he is because there's something deeply wrong with him, due to past abusive experiences? I found her mission to fix him painfully annoying. For me, that is one of the attractions of a dominant--you don't "fix" them, you don't change them, you don't make them what they're not. They are who they are, they want what they want, and they do what they do. As a sub, you accept that and allow yourself to be molded to fit whatever shape they take, somehow fitting the acceptance of that molding into the knowledge that nobody else will accept you for who you are in quite the same way.

For me, a big part of D/s is that acceptance of who someone is beyond all the trappings of what people think that we should be.

I wonder at the mass appeal the story seems to have. I was a bit shocked by how tame it was.

Tame. 50 Shades of Grey was painfully tame, and dare I say, not far beyond the borders of vanilla. I get that maybe it was a whole, "introduce her gently" thing, and it seems to have been somewhat of an awakening phenomenon for a lot of women, but still...I don't really get it.

Maybe I was disappointed in what I perceived as a distinct lack of actual D/s in the story and maybe I was hoping for it to spark something in me that has lain quiet through these last months of insanity. It didn't do that. But it did show me that maybe I'm not as far gone as I feel because there's still more D/s in a moment of my life than in an hour of that story. So for that, despite my disappointment, I do have an appreciation for 50 Shades of Grey. 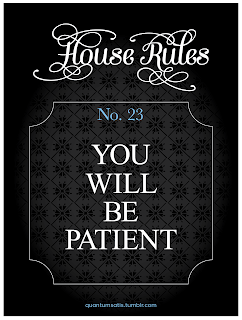 Email ThisBlogThis!Share to TwitterShare to FacebookShare to Pinterest
Labels: musing

I have not become so detached from the things that really matter in life that I have missed Jz's recent announcement.

Please do join up and play with us! I am sadly down on the whole cooking front and could seriously use some new recipes!

Won't YOU please join us?

It's easy to play along.
Just post a recipe that day for a holiday goodie -- any goodie.
It doesn't have to be for cookies… or even be sweet.
We do not discriminate against any goodie.
(We are equal opportunity consumers around here.)

That's pretty much all there is to it.

The single catch is that there's only one way to get your name in the official list of participants: You have to contact me (Jz) by Monday, Dec. 7th with both your name and the address of your blog."
Posted by Storm at 11:04 AM 6 comments: Links to this post

Email ThisBlogThis!Share to TwitterShare to FacebookShare to Pinterest
Labels: Recipes

I was sad to log on and see that I had completely missed love our lurkers day. In all fairness, I've missed a bunch of other stuff too--a birthday, spelling homework, cub scout events, the death of my mom's cat, a bunch of sunsets (though I do tend to see sunrise on my way to work), all the overtime pay I'm not making, breakfasts, lunches, dinners (my kids had ramen for dinner the other night. Ramen. I shall say no more).

We have one of these at work: 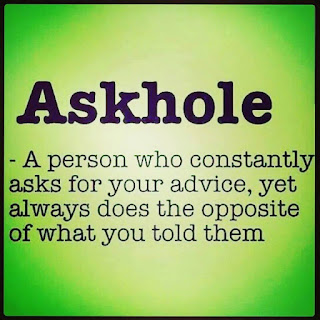 Unfortunately, this person is a manager. And he's a fucking idiot.

My actual job is flying up on me. Quickly. Like two weeks early quickly. It's complex and complicated, there's  lot going on. It requires come forethought, and I have no time for this thought. That freaks me out--I have to plan ahead, or things don't work right or me. I was supposed to have months to figure this all out, not a few days. But we have this manager...He's a fucking idiot. I tried to drop all my cleaning up of his messes about a week ago. You know, so I could concentrate on not being the next disaster zone. Alpha wouldn't let me. It's a safe assumption that we haven't been getting along swimmingly these days....

I spent half of my day discovering and trying to track down mistakes. Just like I spent my whole day before that and the week before that, and the rest of the month doing. So I'm still behind on all of those other things I was supposed to do yesterday that I've been doing for months which don't relate to my actual job but are very important.

I am so friggin tired. And did I mention a bit freaked out? I really do not love my job. Most days, I don't even like it. This is not a life that I ever wanted to live. It's not necessarily a bad life, just not one I ever dreamed of or would have chosen. And it takes everything.

*I think I wrote this a few weeks ago. Dunno really because I'm pretty sure I missed a bunch of those too--I just don't know where they went. And that feeling? Yea... 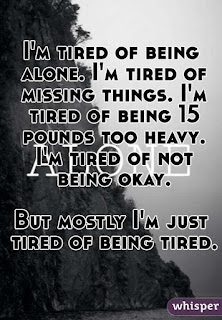